The Evening and the Morning

The thrilling novel from the No.1 Internationally bestselling author Ken Follett. An epic, addictive historical masterpiece that begins in 997 CE and is set against the background of the medieval church and one man's ambition to make his abbey a centre of learning.

International No.1 bestseller Ken Follett returns with The Evening and The Morning, a thrilling and addictive novel from the master of historical fiction. It is 997 CE, the end of the Dark Ages, and in England one man's ambition to make his abbey a centre of learning will take the reader on an epic journey into a historical past rich with ambition and rivalry, death and birth, love and hate. Thirty years ago, Ken Follett published his most popular novel, The Pillars of The Earth, which has sold over 27 million copies worldwide. Now, this novel, the prequel, will take the readers on an epic journey that will end where The Pillars of The Earth begins . . .

Just as transporting as [The Pillars of the Earth] . . . A most welcome addition to the Kingsbridge series

Autorentext
Ken Follett was born in Cardiff, Wales. Barred from watching films and television by his parents, he developed an early interest in reading thanks to a local library. After studying philosophy at University College London, he became involved in centre-left politics, entering into journalism soon after. His first thriller, the wartime spy drama Eye of the Needle, became an international bestseller and has sold over 10 million copies. He then astonished everyone with his first historical novel, The Pillars of the Earth, the story of the building of a medieval cathedral, which went on to become one of the most beloved books of the twentieth century. One of the most popular authors in the world, his many books, including the Kingsbridge series and the Century trilogy, have sold more than 178 million copies. A father and husband, Ken lives with his wife in England and enjoys travelling the world when he can.

Klappentext
Praise for the Kingsbridge novels

'A historical saga of such breadth and density . . . Follett succeeds brilliantly in combining hugeness and detail to create a novel imbued with the rawness, violence and blind faith of the era' Sunday Express

'Where Follett excels is in telling a yarn . . . you won't be able to put it down' Independent

'The characters, both fictional and real, are fascinating, and the Tudor period setting holds its own special allure. This is a novel that fans of historical fiction will savour and cherish' National

'This is a huge book in every way, sweeping and yet detailed, a powerful story packed with superbly drawn characters' Choice Magazine

'Enormous and brilliant . . . this mammoth tale seems to touch all human emotion - love and hate, loyalty and treachery, hope and despair . . . This is truly a novel to get lost in' Cosmopolitan

Zusammenfassung
From master storyteller Ken Follett, The Evening and the Morning is a historical epic that ends where The Pillars of the Earth begins.

A Time of Conflict
It is 997 CE, the end of the Dark Ages. The king's grip on the country is fragile and chaos reigns. A young boat builder dreams of a better future after a devastating Viking raid shatters the life he hoped for.

Lives Intertwined
A Norman noblewoman follows her husband to a new land only to find her life there shockingly different; and a capable monk at Shiring Abbey has a vision of transforming his humble home into a centre of learning admired throughout Europe.

The Dawn of a New Age
Now, with England at the dawn of the Middle Ages, these three people will each come into dangerous conflict with a ruthless bishop, who will do anything to increase his wealth and power, in an epic tale of ambition, rivalry, love and hate.

Thirty years ago we were introduced to Kingsbridge in The Pillars of the Earth, and now in this prequel international bestseller Ken Follett will take us on a journey into a rich past, which will end where his masterpiece begins. 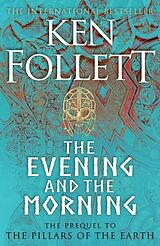